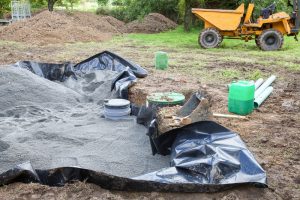 Superior Septic Services can handle your septic service in Marysville. Ever since humans began to gather in groups of more than two or three, managing sanitation has been a concern of civilization. No matter how we dress it up, human waste occurs – and someone or something must deal with the clean-up.

The method of dealing with sewage, the combination of bathroom and kitchen wastes that proceed from any human habitation, has created a certain amount of debate. One author, J. C. Jenkins, author of the Humanure Handbook: A guide to Composting Human Manure, contends that earth closets are a better solution to household sanitation than the prevalent water closet. The problem with his design is that it presumes an area where the resultant compost can be isolated while it decomposes, and it also requires the humans in the household to engage in a certain amount of hands-on management – even if not directly. A septic tank is, in many ways, a composting process. The solids from the sewage are captured in a holding tank where they are isolated and allowed to appropriately decompose. The liquids are filtered and returned to the earth where they become part of the eternal cycle of evaporation and precipitation. A well-managed septic tank is, in nearly every sense of the word, an efficient composting system.

Superior Septic Services can handle your septic service in Marysville, just call (425)905-2485 to learn how we can keep your home sanitation system functioning appropriately. With apologies to Mr. Jenkins, we will leave his earth closets to those truly remote places – the ones where even our small tanker truck cannot penetrate. We do applaud his efforts to raise consciousness of the need to responsibly deal with all sorts of waste – including those bathroom wastes that occur for everyone.